Cushion cut diamonds are elegant and distinctive engagement rings. However there are quite a few variations of the cushion cut available on the market which can make consumers confused. We’ve provided some guidance below to help you decide whether a cushion cut diamond is the right option for you. You may wish to read our general guidance on diamond grading 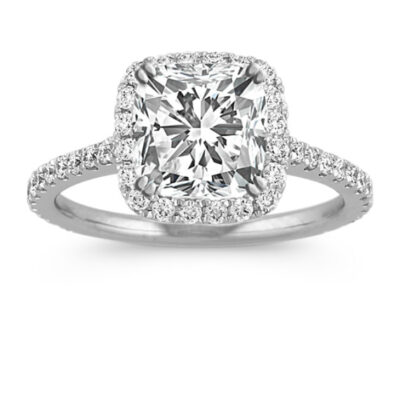 Combining The Best Of The Old And The New

The modern cushion cut has evolved from the old mine cut, which was the most popular shape for a diamond until the early twentieth century. Perhaps this is why today’s cushion cuts are evocative of a bygone era and are particularly popular choice for vintage-style engagement rings. While modern cushion cut diamonds are shaped like old mine cuts, with a ‘soft’ square or pillow shape (giving rise to the name), their faceting is similar to the round brilliant cut pioneered by Marcel Tolkowsky during the first part of the twentieth century. As a result, they tend to sparkle more than the older stones.

Modern Cushion Cuts Are Are Less Forgiving Of Poor Clarity

Modern cushion cut diamonds have much larger table facets than the old mine cuts, which means that they are less forgiving of poor clarity — a centrally located inclusion is likely to be visible. If you are considering a stone graded SI1 or lower, it is likely that it will not look flawless to the naked eye. 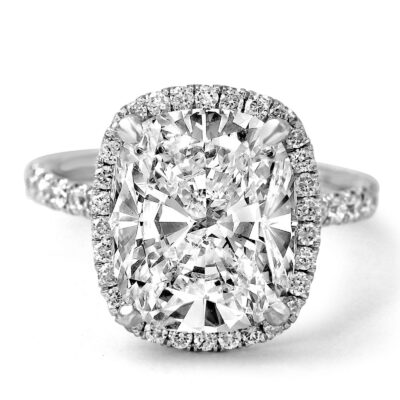 On a technical level, modern cushion cuts are divided into two groups – cushion brilliants and cushion modified brilliants. The two are faceted the same on the top (known as the crown), but the modified variation has an extra row of facets on the underside (known as the pavilion). The different faceting patterns should be outlined on the diamond’s certificate.

Don’t Make Your Decision Based Only On A Certificate

There are a couple of key factors that won’t become clear from the paperwork. The first is the shaping of the diamond’s corners. Some cushion cuts have corners that are almost square or right-angled, while others are much more ‘soft’ or rounded. This is a matter of personal preference.The second issue is whether the stone is a ‘chunky’ or a ‘crushed ice’ cushion. With a chunky cushion, if you look through the table from above you will see the facets line up neatly, often making an ‘X’ shape that meets in the middle of the stone. This is similar to the faceting that you would see in a round brilliant cut. However, with a ‘crushed ice’ cushion, the facets will appear to be distributed randomly, hence its name – this is also sometimes referred to as ‘broken glass’, and resemble  the pattern you would typically see in a radiant cut.

Please feel free to get in touch if you have any questions, or to discuss commissioning your own bespoke design.