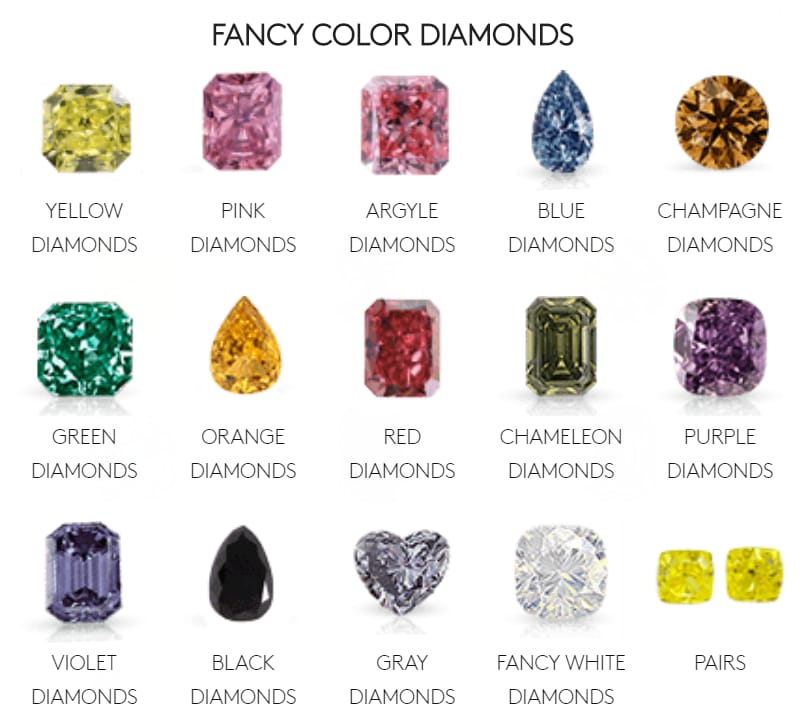 In diamonds, rarity equals value. With diamonds in the normal range, value is based on the absence of color, because colorless diamonds are the rarest. With fancy color diamonds—the ones outside the normal color range—the rarest and most valuable colors are saturated pinks, blues, and greens. In all cases, even very slight color differences can have a big impact on value.Compared to fancy yellows and browns, diamonds with a noticeable hint of any other hue are considerably more rare.

Even in light tones and weak saturation, as long as they show color in the face-up position, they qualify as fancy colors. Red, green, and blue diamonds with medium to dark tones and moderate saturations are extremely rare.Grading fancy color diamonds is complex and specialized, and it takes highly trained laboratory graders to complete the process accurately.The GIA system for color-grading fancy color diamonds is designed to accommodate the fact that not all colored diamonds have the same depth of color. For example, yellow diamonds occur in a wide range of saturations, while blue diamonds do not. 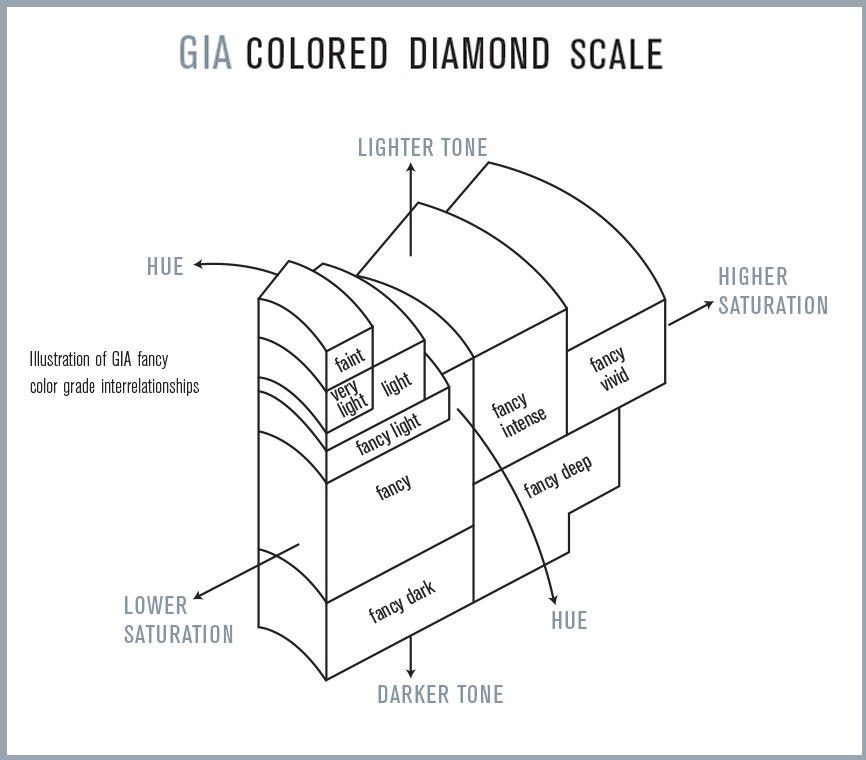 Diamonds with red or reddish colors are extremely rare and highly valued. Pure pinks are more popular than diamonds that are purplish, orangy, brownish, or grayish. Trade professionals market some very attractive stones in this category as “rose-colored,” and some stones with purplish tints as “mauve” diamonds.Blue diamonds are extremely rare. They generally have a slight hint of gray, so they’re rarely as highly saturated as blue sapphires. Their color is caused by the presence of boron impurities—the more boron, the deeper the blue. 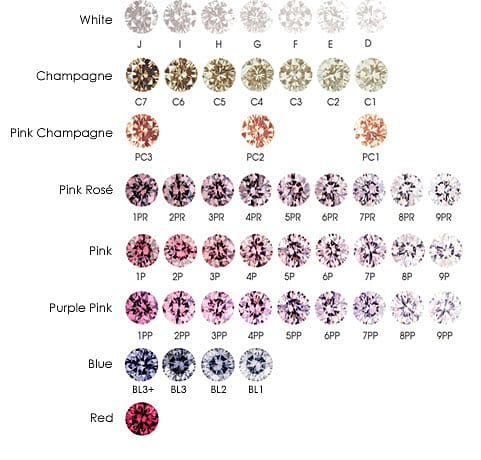 Fancy green diamonds are typically light in tone and low in saturation. Their color often appears muted, with a grayish or brownish cast. The hue is generally in the yellowish green category. In most green diamonds, the hue is confined to the surface, and rarely extends through the entire stone. That’s why cutters try to leave as much of the natural rough around the girdle as possible.Green diamonds get their color when radiation displaces carbon atoms from their normal positions in the crystal structure. This can happen naturally when diamond deposits lie near radioactive rocks, or artificially as a result of treatment by irradiation.

Naturally colored green diamonds are extremely rare. Because of their rarity and the very real possibility of treatment, green diamonds are always regarded with suspicion and examined carefully in gemological laboratories. Even so, advanced gemological testing can’t always determine color origin in green diamonds.Brown is the most common fancy diamond color and also the earliest to be used in jewelry. Second-century Romans set brown diamonds in rings. In modern times, however, they took some time to become popular.Brown diamonds were typically considered good only for industrial use until the 1980s, when abundant quantities of them began to appear in the production of the Argyle mines. The Australians fashioned them and set them in jewelry. They gave them names like “cognac” and “champagne.” The marketing worked, and brown diamonds are found in many medium-priced jewelry designs today.

Brown diamonds range in tone from very light to very dark. Consumers generally prefer brown diamonds in medium to dark tones with a warm, golden to reddish appearance. They generally show a hint of greenish, yellowish, orangy, or reddish modifying colors.Yellow is diamond’s second most common fancy color. Yellow diamonds are sometimes marketed as “canary.” While this isn’t a proper grading term, it’s commonly used in the trade to describe fancy yellow diamonds.Until the late 1990s, there was not much demand for black diamonds. But designers started using them in jewelry, especially contrasted with tiny colorless diamonds in pavé settings, and they began to gain in popularity.

Fancy white diamonds also exist. They have a milky white color. Sometimes white diamonds are cut to display beautiful opalescent flashes of color.There are also gray diamonds. Most of them contain a high level of hydrogen as an impurity element, which probably causes their color.

Size and shape are two aspects of cut that can influence diamond color. The larger a diamond is, or the deeper its pavilion, the farther light can travel in it. This can often lead to a richer, more intense color.The style of the cut can also influence color. Cutters discovered that certain styles—typically mixed cuts like the radiant—can intensify yellow color in diamonds that are toward the lower end of the D-to-Z color-grading scale. When carefully fashioned as radiant cuts, many yellow-tinted stones—at one time called “cape” by the trade—can become fancy yellows when viewed face up. This perceived improvement in color increases the price per carat. As an added benefit, the radiant style provides higher yield from the rough than a standard round brilliant. 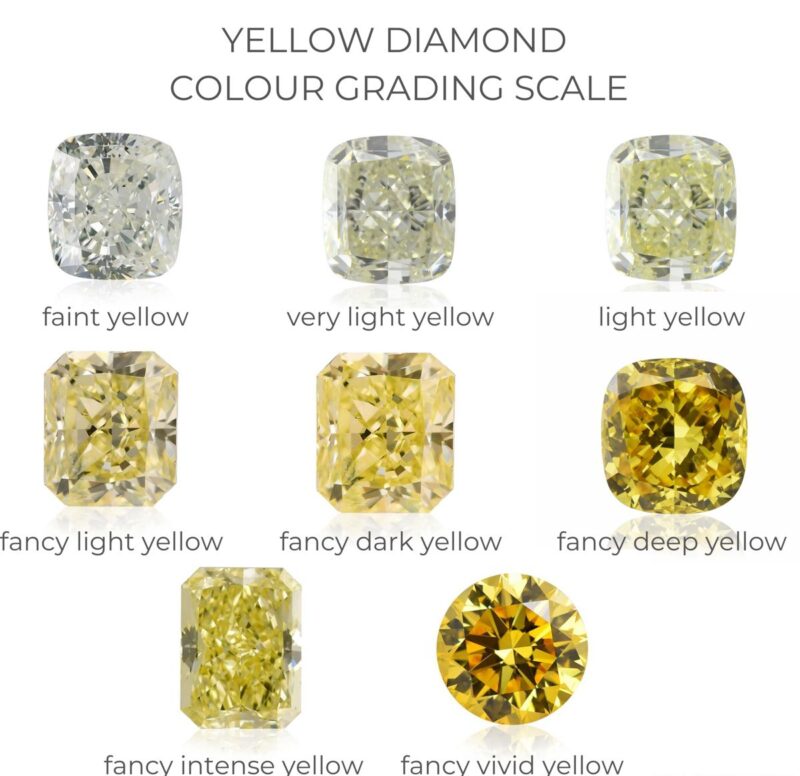 As with diamonds in the normal D-to-Z color range, large fancy color diamonds are rarer and more valuable than small ones.