In the context of engagement rings, the term ‘vintage’ means different things to different people, but we define vintage engagement rings to be those that are typical of the Edwardian and Victorian eras. Vintage-style engagement rings are typically ornate in design, and capture the elegance, romance and quality of these bygone eras. And more than a century after they first became popular, these striking designs are fashionable once again — testimony to the enduring style and beauty of these stunning rings. 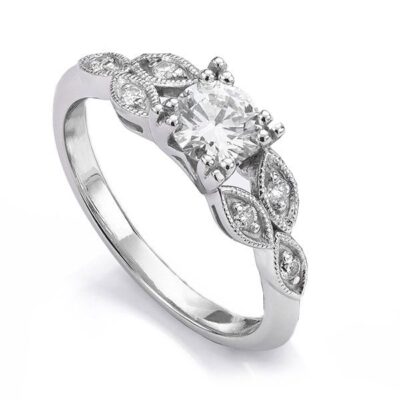 The Victorian era was marked by discoveries of gold and diamonds in South Africa, these finds had a direct impact on the jewellery of the time, helping to make fine jewellery accessible to the middle classes that had emerged from the Industrial Revolution. Victorian engagement ring designs were heavily influenced by discoveries of ancient Egyptian, Greek and Roman treasures during this period, but the style of Victorian engagement rings evolved significantly over six decades from Queen Victoria’s coronation in 1837 until her death in 1901.Early Victorian engagement rings tended towards the large and more ornate, but later the fashion was for smaller and finer pieces, with gemstones being displayed in increasingly intricate and varied settings. This era also saw the the height of the Art Nouveau movement, inspired by the elaborate curves and free-flowing forms found in nature – a direct reaction against the age of industrialisation.

The metal of choice for engagement rings throughout the Victorian period was 18ct gold, and until 1854 only 18ct gold was hallmarked in Britain. Thereafter, 9ct, 12ct and 15ct gold was allowed to receive a quality stamp too, paving the way for cheaper jewellery. Of the precious gemstones, opals were one of Victoria’s personal favourites, but coral, turquoise, pearls, garnet and amethyst were also favoured for use in Victorian engagement rings. However, diamonds became increasingly popular in the latter part of Victoria’s reign, after large deposits were found in the 1860s and their affordability improved. The advent of electric lighting in the 1880s probably also helped by showing off diamonds’ sparkle to best effect! 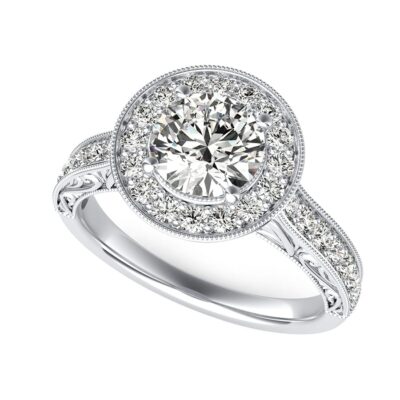 The death of Queen Victoria in 1901 was followed by the reign of her son, King Edward VII, who died in 1910. The Edwardian era witnessed the development of new technologies such as the car, the aeroplane and the cinema, and importantly for jewellery, the invention of the oxy-acetylene torch, which made it far easier for jewellers to work with platinum. Platinum’s high tensile strength allowed the Edwardians to pioneer elaborate and delicate designs, with lacy patterns and open filigree. Coloured gems experienced a resurgence in popularity during the period, with sapphires often being used as the main gemstone for engagement rings, and small diamonds being used for decoration. The jewellery of this era matched the spirit of the ‘Belle Epoque’ – elegant, feminine and delicate, to complement the silk dresses and feathered hats of the time ,This really was the ‘Beautiful Era’.

Please feel free to get in touch if you have any questions, or to discuss commissioning your own bespoke design.