First known to mankind back in 250BC, however the first discovery was in Australian mines around 1880, the name is derived from the latin word “opalus” meaning gemstone of many colours. Australia is said to mine 95% of world’s opal.

Opals are beautiful gems is milky in colour with combination of different colours many say the colours are of the rainbow, volcanoes and galaxies. It is said the gem is formed from rain as water seeps through rocks, the silica that is left behind once the water dries out hardens into an opal. Romans thought it was the most precious and powerful stone of all times. It is also one of the gems that have been discovered outside of our planet. And known as queen of gems as queen Victoria’s favourite gemstone was opal. As with all gems opal consists of flaws and inclusions.

Extra care should be taken when worn out in daylight to protect the precious gemstone. It is strong however a little to brittle for everyday knocks. It is ideal for earrings, brooches and pendants but not recommended for rings, however many do choose to wear opal rings with extra care it can prevent damage. Opals is often carved into ornamental pieces such as animal or flower carvings, it can be worn by both men and women. Opal gem when set with yellow gold gives it the extra contrast and adds to its natural beauty with its simplicity and elegance. Synthetic opal stones are produced and can be recognised as it is usually much cheaper, when purchasing make sure to buy from a reputable jeweller. 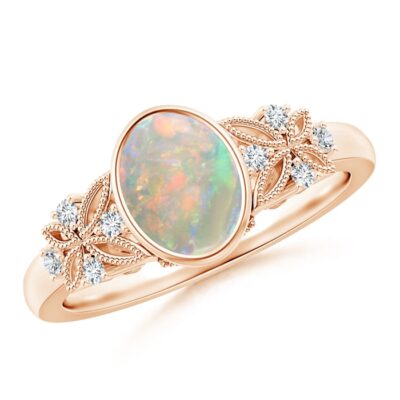 Opals are believed to enhance imagination, represent wisdom, hope and confidence it is also birthstone for August.

Opal is a soft delicate gemstone which is vulnerable to scratching, damage and erosion. Opal jewellery should be stored in a soft jewellery pouch or box when not being worn to avoid scratching and damage. It should be cleaned thoroughly with water and dried with a soft jewellery cloth. Opal jewellery should not be cleaned with diamond or gemstone solution cleaner and contact with harsh detergents and chemicals such as bleach or chlorine should be avoided as they may cause erosion to the stone. With opals there is also a risk of the stone drying out and cracking especially in environments with low humidity, avoid wearing it hot summery day. Leave opal jewellery in the bathroom while showering as the steam will help to prevent the stone cracking.